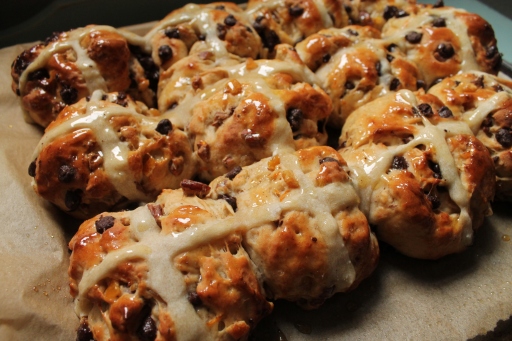 Just like Christmas, Easter is a time to connect with others, unwind and well, also enjoy “celebration” foods. Because we’re not Christian, we think of bunnies, chicks, carrot cake, Easter eggs and TWO Bank holidays. For some of you, it also means eating a whole Easter egg in one day. For others (like us), it’s the beginning to eat an Easter egg and stretching it out for as long as possible so that it still feels like Easter in a month’s time. (A very sad realisation when the egg is finished!) And if you grew up in England, it also means eating a hot cross bun on Good Friday. (Don’t you love a ritual that involves food?)

When you think about it, hot cross bun making is a great primary school tradition. Essentially, you’re learning how to make an enriched dough, how to be very patient (a typical recipe involves 2 or 3 proves), the Hot Cross Bun Song, why we make hot cross buns and then ultimately that we don’t like raisins (more of a personal life lesson there).

Why do we eat them? Hot cross buns are normally eaten on Good Friday to commemorate the day and the cross on top symbolises the crucifixion of Christ. Apparently at one point in our history, you were banned from eating them on any other day, given their important symbolism. (I think we should reinstate this rule as it is really disconcerting seeing them in supermarkets in early January.)

We have to admit, hot-cross-bun-eating (or making) has not been a key Easter tradition for us. It was mostly a fixation by the adults in my family – for us kids, we just obsessed over how many chocolate eggs we would get, prioritising them by the chocolate bar that came with it (Chocolate buttons were the best, Crunchie bars were the worst) and then figuring out which one we would eat first. We think it’s worth mentioning that growing up, we weren’t given very much sugar (unless we were at our grandparents’ houses) during the rest of the year. But as we’re growing up (up, not old!), we’re appreciating the subtle taste and comfort of hot cross buns as well as the fact that it is a tradition still restricted to the British Isles/Commonwealth (Ben & Jerry’s haven’t come up with a Hot Cross Bun Ice Cream yet – though having thought about it, it’s a fabulous idea!).

We agree, it is so much easier to buy them. There are all kinds of varieties available – toffee, ginger, date and cranberry – but most of them, to our chagrin, contain raisins and actually being factory-made, they’re really not as delicious as the ones you make at home. Now, having made them, you might decide it really is too much effort – but hey, at least you know what they’re supposed to taste like….

And having just come back from New Orleans, we decided that we could come up with a chocolate and pecan variety to please everyone. 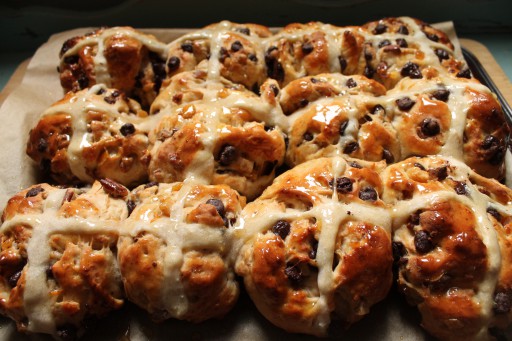 Method as stated in the recipe. However, we substituted the following:

So what do you think? Feel free to share your questions and comments below! We’d love to hear what you have to say.

Do you love it? Cancel reply